Class Of Underemployed: Nearly 50 Percent Of Recent College Graduates Are Working In Jobs Where No College Degree Is Required - Sagacious News NetworkSagacious New...

(MyBudget360) We don’t send our young into the wilderness for a vision quest as a rite of passage.  There are few things in modern society that signify a transition into adulthood.  Going to college is one of them.  And in debt addicted America, it is no surprise that for many, college debt is the first debt they will take on.

Getting a college education is supposed to give someone a well rounded view of the world and a potential skill set.  Some argue that college is not about vocational training.  That to some degree is true but when students are going into $50,000 or $100,000 of student debt, then what is this modern day life quest really teaching and why is the price tag so incredibly high?

As college graduation season comes into full bloom, many are left with the prospect of having no job lined up.  It is also startling to see how many recent college graduates are working in jobs that really don’t require a college degree (so clearly the vocational piece doesn’t matter here).

There are over 5,300 colleges and universities across this country from Harvard to beauty schools.  The market is enormous and students now carry $1.3 trillion in debt, the biggest debt sector only behind mortgage debt.

Many recent college graduates are severely underemployed and this is for the lucky group that actually finds work: 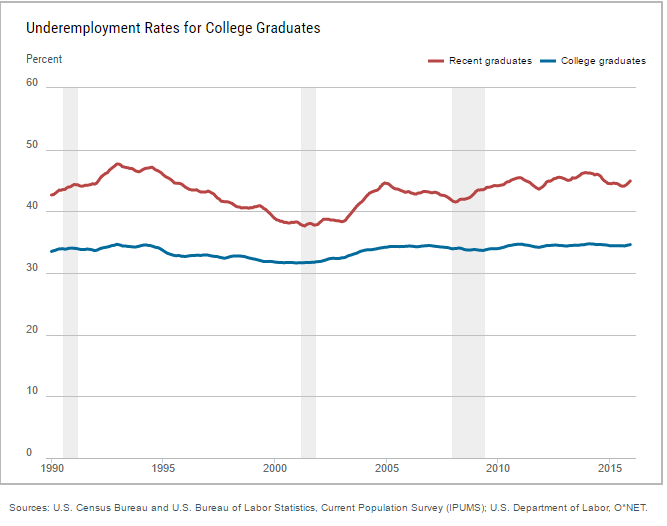 Nearly 50 percent of recent college graduates are working in jobs where a college education isn’t typically required.  So that life quest was indeed an expensive one, more so than taking drugs and roaming around in the forest.  And the bills are coming due since student loans normally start being sent to graduates six months after graduation.

In Michigan a strip club has angered residents by posting this: 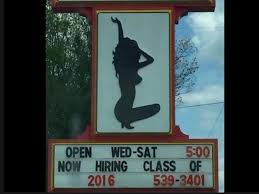 When strip clubs realize that college degrees are ubiquitous and many will struggle to find jobs, we really have to question the price structure of college.  And I would argue that there needs to be some vocational aspect of a college education when students are paying so much to attend. This ties into many larger issues like many younger Americans being unable to afford home purchases because they carry on so much college debt.  86% of Millennials through a Housing Pulse survey said that too much debt was an obstacle to owning a home.  It is also the case that Millennials that did buy in many cases had help from family.

The underemployment rate is troubling because as the cost of a college education soars beyond the typical inflation rate, the yield in the marketplace isn’t very observable.  College tuition is up 145% since 2000:

It should be obvious to anyone that this structure will not last.

via IFTTT
Posted by Steve Hargadon at 8:02 PM 1 comment:

College vs. Bootcamps for Coding...

Bootcamp grads match or beat college grads on practical skills (aka. understanding a problem, coming up with a solution, and rendering it in code). But when it comes algorithms, low-level systems, and how a computer actually works (aka. “deeper knowledge”), they do far worse.

In other words, bootcampers learn the practical skills necessary to be productive programmers but lack an understanding that college students pick up over time...

“Bootcamp grads don’t make sense for all companies.. But the significant majority of companies needs programmers to solve practical problems on the web. On this axis, we’ve found bootcamp grads totally competitive.”

Overall, Triplebyte has had “roughly equivalent success” working with both groups. And while some students might still be better served by getting a traditional CS education, they believe the best bootcamp grads are on an equal playing field once they enter a life of coding.

'via Blog this'
Posted by Steve Hargadon at 10:59 AM No comments:

HOW TO BECOME BETTER THAN YOU EVER THOUGHT POSSIBLE

Starting at the age of four, young Wolfgang began working full-time with his father, who was also a musician, on practicing the violin, keyboard, and other instruments. By the age of seven, he had put in more hours than most students graduating from Juilliard School in New York City.

So was Mozart born with some special ability to discern musical notes in a way that most people cannot? According to science, no. Nonetheless, Mozart was gifted. He had the same gift we all have. He had his brain, a brain that is capable of achieving a level of performance that looks a lot like magic to those who don’t understand it.

The “gift” that we often talk about is your ability to learn, and grow, and adapt. And that’s a gift we all are born with. In other words, you’re closer to reaching your personal peak than you may realize.

Posted by Steve Hargadon at 5:57 AM No comments:

Email ThisBlogThis!Share to TwitterShare to FacebookShare to Pinterest
Labels: Mindset

Posted by Steve Hargadon at 8:34 AM No comments: